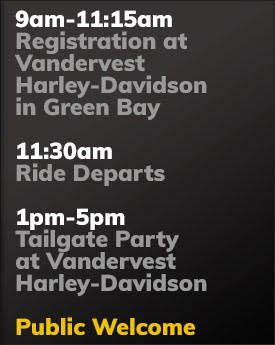 "The cruise has partnered with area cancer related organizations in an effort to enrich the lives of local families experiencing the life altering effects of cancer. Together with the help of the community, our quest is to instill the love of life in our recipients through providing compassionate care and support during their journey with cancer and beyond. A one day smile may be contagious and invaluable." -- Jerry Parins 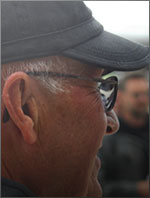 About Jerry and the Cruise for Cancer

Diagnosed with cancer on February 10, 2003 at the age of 64, Jerry Parins embarked on a journey that would undoubtedly change his life.

Throughout his surgery and two grueling battles with chemotherapy, which lasted nearly a year, Parins, like many cancer patients, found it difficult to keep a positive frame of mind. With the unwavering support of his family, friends like Pat Dougherty, Vandervest Harley-Davidson, the Wild Fire HOG Chapter and now the Packerland HOG Chapter, his co-workers from the Green Bay Packers, Parins put cancer behind him and continues to stay one step ahead of the disease that has affected millions of families worldwide in one way or another.

His 40-year association with the team began in 1965 under Head Coach Vince Lombardi, who contacted the Green Bay Police Department looking for help keeping fans off the practice field. Parins, then 24, volunteered his time by working practices, gamedays and assisting in the Packers weight room.

Today, Parins is volunteering his time for a different cause.

Continuing a love affair with motorcycles that began at an early age and continued throughout his career as a police officer, Parins, just 16 months after being diagnosed with cancer, coordinated the first annual 'Jerry Parins Cruise for Cancer.' Fourteen years later, the Cruise is still going strong. Over the course of the last 16 years, the motorcycle ride has raised over $2 million for various cancer-related organizations, many of which he encountered during his treatment at St. Vincent's Hospital in Green Bay.